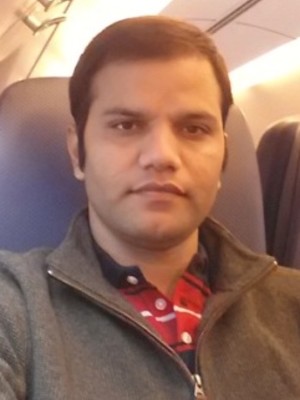 Abhishek received an MSc. in Mathematics from University of Rajasthan, Jaipur (India) in 2011. He qualified GATE – 2012 with All India Rank – 046 and CSIR – JRF June – 2012 with All India Rank – 032 in Mathematics (GATE is a competitive exam conducted by IITs for pursuing Masters and PhD in IITs and NITs, and CSIR is the national level examination in India for postgraduate candidates who wish to qualify for universities level teaching jobs in India and or admission to PhD research programmes). He also received an M.tech in Industrial Mathematics and Scientific Computing from Indian Institute of Technology, Madras (India) in 2014 and his master thesis was on 'Monte Carlo Simulation Of Stochastic Volatility Models'.  In October 2014, he started as a PhD student at the University of Amsterdam in Amsterdam, under the supervision of Prof. dr.  Onno Boxma, Prof. dr. Michel Mandjes, Prof. dr. Sindo Núñez Queija and Dr. Marko Boon, and his project is about 'congestion analysis of unsignalized intersections'. His main research interests are in road traffic modeling and queueing theory.