On Friday January 30th 2015 the project’s second off-campus meeting was organized, this time at Boerhaave Museum in Leiden. The meeting is meant as a platform for all NETWORKS researchers, to meet each other, to discuss scientific progress, but also to exchange various organizational issues.

This time four new members of the project team presented themselves. Tim Hulshof has been appointed as of January 1st 2015 at TU/e, as a tenure-track assistant professor in the group of Remco van der Hofstad, where he will be working on random-graph-related issues. Haralambie Leahu has joined the team of Michel Mandjes at UvA, as a postdoc, where he studies automated, simulation based, algorithms for detecting the stability region of complex stochastic networks. In the third place there was Sanchayan Sen, also having joined Van der Hofstad’s team at TU/e, as a postdoc, working on random graphs. Masha Remerova, appointed at UvA as of March 1st 2015, will be looking at complex queueing networks, with a focus on stability, fluid limits and large deviations.

The technical program was concluded by Mark de Berg, presenting the plans of the project’s educational committee. The committee had developed a questionnaire to find out about the project members’ needs, and based on that it will organize education weeks on various NETWORKS-related themes.

The day was ended by a guided tour through the museum, showing Leiden’s impressive scientific history, and by drinks at Stadscafe van der Werff. 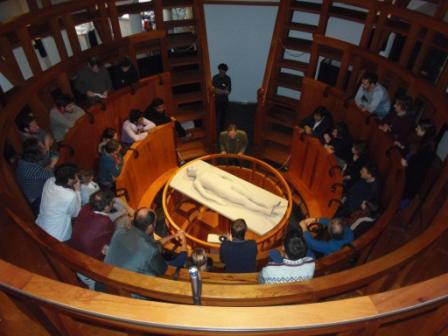