Frank den Hollander has received the Humboldt Research Award at a ceremony for the Humboldt award winners on 29 March 2019 in Bamberg. He was nominated by two German colleagues with whom he is working together for an extensive period of time. ‘The award was a complete surprise to me.'

The breadth of his interdisciplinary projects is unique, bridging from Mathematics to Theoretical Physics, Theoretical Biology and more recently to Computer Science. In Germany, he will work on stochastic spatial population models and issues of metastability in mathematical physics.' 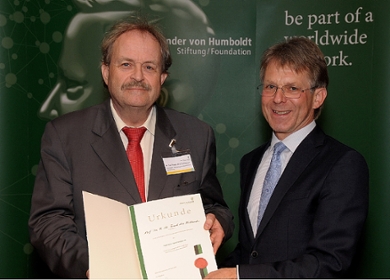 Frank receives the award from the president of the Humboldt Stiftung

About the Humboldt Research Award

The Humboldt Research Award is a recognition of a researcher's entire achievements to date. The prize is awarded to academics whose fundamental discoveries, new theories, or insights have had a significant impact on their own discipline and who are expected to continue producing cutting-edge achievements in the future. Academics from abroad, regardless of their discipline or nationality, may be nominated for a Humboldt Research Award. Award winners are invited to spend a period of up to one year cooperating on a long-term research project with specialist colleagues at a research institution in Germany.