On 28 January 2022 at 16:00, Rik Timmerman (TU/e) will defend his PhD Thesis titled 'Performance analysis at the crossroad of queueing theory and road traffic'.

Congestion is a common phenomenon in road traffic. Despite all sorts of countermeasures, congestion remains an enormous societal problem. Mitigating the negative effects of congestion is a hard task and therefore a substantial body of research has been devoted to the prevention and reduction of congestion. Common sources of congestion are intersections, where many vehicles have to share a common scarce resource. Traffic-light control might be used to reduce some of the congestion if the control is well-adapted to the various traffic streams leading to the intersection. However, a good traffic-light control is typically difficult to obtain, e.g. due to stochasticity in the arrival times of vehicles at the intersection. Motivated by these observations, we (among other things) deepen and extend the knowledge regarding traffic-light models that aim to represent such stochastic influences.

In particular, we study the so-called Fixed-Cycle Traffic-Light (FCTL) queue. We derive a novel way to obtain a rigorous performance analysis. This analysis allows us to study a general rule to obtain the right balance between the green and red times which allows us to strike a balance such that, even when very busy, the queue in front a traffic light entirely dissolves often during the green period. This rule also allows us to find traffic-light settings that are close to the optimal settings. We also study several extensions of the FCTL queue such as scenarios where (turning) vehicles are blocked by pedestrians that receive a green light at the same time as the vehicles. Moreover, we investigate how the general rule to balance the green and red times performs when the green and red times are no longer fixed but depend on the number of vehicles waiting to cross the intersection. For such traffic-light models we also provide an approximate performance analysis, since the underlying queueing models are generally intractable.

Apart from the above, we also look at a case with autonomous vehicles. In particular, we investigate how autonomous vehicles should approach an intersection and what the effect of platoon forming of arriving vehicles is on several performance measures. Subject to several criteria, we see a large potential reduction in congestion. Finally, we study congestion at highways. We develop a data-driven algorithm that enables us to automatically identify so-called high-performance days, days with both a high traffic flow and no congestion. Ultimately, the easy identification of such days might lead to countermeasures against congestion on highways. 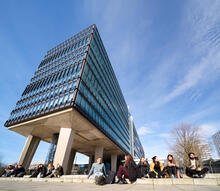 Atlas building, room 0.710, TU/e, or online depending on the circumstances.